Opioid overdoses continue to claim over 100 American lives every day (46,029 in 2017). This slaughter now exceeds the number of annual traffic deaths (37,000 in 2017), which has benefited from gradual reductions related to improved safety in both roadways and vehicles. In an Annals of Internal Medicine article, Drs. Levine and Fraser proposed elements of a comprehensive public health response to the opioid crisis.

They established six categories to approach the crisis: (1) Leadership, (2) Partnerships, (3) Epidemiology, (4) Prevention/Education, (5) Treatment and Recovery and (6) Overdose Prevention. Some of the key elements of each category proved a framework for a coordinated approach in which public health plays a leading role.

Leadership entails the engagement of all leaders from the governor’s office down to community leaders, not only in healthcare, but also in education, corrections, social services and economic development. 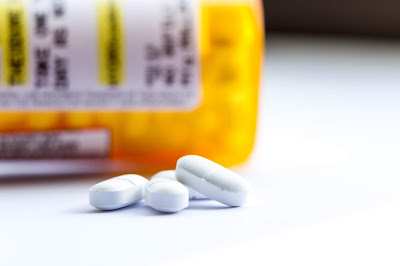 Partnerships include not only those within communities, but also those between states, the federal government, faith-based organizations and health community coalitions, among others.

Epidemiology serves to create databases and dashboards available to all interested and engaged parties. The Louisiana Opioid Data and Surveillance System fulfills this valuable role by providing local data relating to specific populations.

Education and prevention involves prescribers, pharmacists and the public. This includes the state Prescription Monitoring Program, regulation of pain clinics, sanctions for over-prescribers, and working with school-based health clinics and the Department of Education to improve drug awareness.

Treatment and recovery must be enhanced with increased availability to rehab facilities, expansion of medication assisted treatment (MAT), use of telehealth in rural areas, and improved post-recovery programs addressing employment, housing, transportation and other social needs.

Harm reduction and overdose prevention must include safe syringe programs (such as one being proposed locally), increased availability of naloxone (Narcan®), and improved diagnosis and treatment of underlying pre-disposing mental health factors such as depression.

This ambitious plan reflects a multi-faceted approach and broad engagement from multiple elements of society. It recognizes the importance of social determinants such as educational level and income, as well as the necessity of addressing glaring issues of health inequity. Public health can have a primordial role in tackling the opioid epidemic, but it cannot act alone or in a vacuum. We all helped create the world of opioid addiction in one way or another, and now we must rise to the occasion to help mitigate and eradicate it.
Posted by Louisiana Department of Health at 7:00:00 AM No comments:

What do we do when we think it could be Alzheimer’s disease?


There can be nothing more heartbreaking and frightening than watching a parent or loved one slowly decline with memory problems or signs that indicate they may have dementia. Ask any older person about their biggest fears and inevitably the words “Alzheimer’s disease” enter into the conversation.

Approximately every 6 minutes someone receives an Alzheimer’s diagnosis. In Louisiana, 87,000 people over the age of 65 are living with Alzheimer’s, and 232,000 family caregivers are dealing with the effects of their loved ones needing care and support.

Alzheimer’s disease is a sixth leading cause of death in the U.S.  In 2017, there were 2,188 deaths in Louisiana related to Alzheimer’s, a 170% increase since 2000. This figure is projected to increase by 23.6% by 2025. Frightening, right? Despite this, only 16% of seniors receive regular cognitive assessments during routine health checkups. If you see signs, consult your primary care physician or neurologist.

The more we talk about Alzheimer’s, the more people are educated about its symptoms. The other side of the coin is that without clear guidance and professional consultation, our fears can cause us to jump to conclusions. For this reason, the Alzheimer’s Association provides education about this disease and what signs and symptoms we should be looking for. 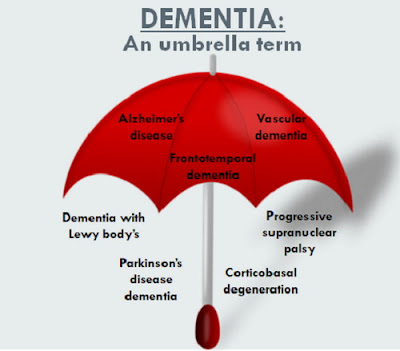 It is important to know that dementia is an umbrella term and while Alzheimer’s disease is the most common cause of dementia, there are many reasons why someone may be showing signs of dementia.

Know the 10 signs of Alzheimer’s


The three stages of Alzheimer’s 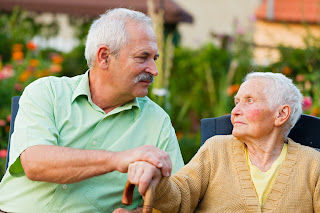 It is true that there is no cure for Alzheimer’s disease, but through research we know there are ways for us to reduce the risk, including activities such as regular exercise, keeping one’s blood pressure within current healthy guidelines and engaging the brain. These small things help us maintain and protect our brain health.

While there is no cure, clinical trials continue locally and nationally. There are many important advances and efforts to help people better cope with the effects of the disease and to work toward a cure. Research also continues into how to help a person live with Alzheimer’s while focusing on the needs of the primary caregivers who experience the physical, emotional and mental burden of caring for someone who has Alzheimer’s.

Someone who is unable to care for themselves and who needs care in the home may be eligible for home and community-based services. For more information about these services, call Louisiana Long Term Care Options at 1-877-456-1146. Here are some additional places to go for help:

Posted by Louisiana Department of Health at 7:00:00 AM No comments: 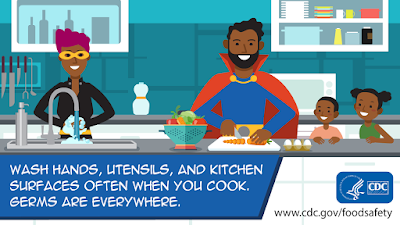 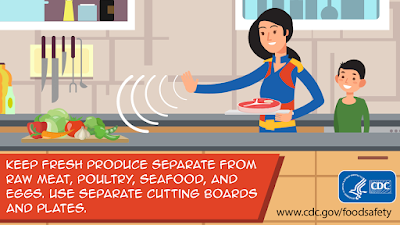 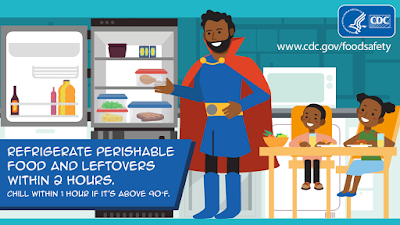 Generation Rx part of the prescription to treat the opioid crisis

Prescription misuse among teenagers and young adults was the topic of a workshop during the Louisiana Opioid Action Summit held Sept. 4-6. Summit attendees learned about Generation Rx, a free program created to help raise awareness about misuse of prescription pain relievers. Such misuse has been viewed as a key driver of the opioid epidemic, and the Louisiana Department of Health has led efforts to educate physicians about the dangers of overprescribing opioid pain medication.

However, more can be done to educate people from all age groups about the dangers of prescription misuse. That's where Generation Rx comes in. The program has specially designed educational materials targeting five age groups (elementary, teen, college, adult and older adult), with materials for young people that can be used in K-12 education and in higher education.

Nicole Cartwright Kwieck, a clinical professor of pharmacology at The Ohio State University, where Generation Rx was developed, presented during the summit session on teens and young adults. Kwieck said that a team of researchers and professors created Generation Rx after realizing there was a need for better education around prescription drug use — particularly in school settings.

“We do a terrible job in this country teaching people how to use medications,” Kwieck said. “If you think back on your own experience ... you were probably weren't taught in school. You were probably taught by a parent or a loved one, maybe a professional.”

The core messages communicated through Generation Rx are:
In developing the teen and higher education-focused section of the program, Kwieck said, program authors considered the idea that teens and young adults are often seeking new experiences and may see the risk of any type of drug misuse as compelling. They also tend to overestimate the risky behaviors of their peers, leading to conclusions such as “Everyone else is doing it so I can, too.”

The materials were also developed with the idea that teens often don't respond well to lectures and have short attention spans, so the activities are designed to get “them out of their seats” and highlight the dangers that prescription misuse poses. Activities include a Family Feud-style game, an interactive discussion designed around a PowerPoint presentation and skits that allow participants to act out various scenarios.

Rusty Fornea, who spoke during the session for the Washington Parish-based ADAPT Inc., said the organization deployed Generation Rx in parish schools in the spring and received positive responses. Some of those schools, Fornea said, have asked when Generation Rx will return.

“Once we were able to get it rolling, the facilitators and the youth really enjoyed it because it's interactive,” Fornea said.

More than 5,700 Americans misuse a prescription pain reliever each day, according to the National Survey on Drug Use and Health.

While 83% of those prescriptions came from a single doctor, more than half of those misused were obtained through a friend or relative, according to data from SAMSHA. That means that misused prescription pain relievers are often not prescribed to the person taking them, which is helping fuel the opioid crisis and leading to addiction and overdose deaths.

You can learn more about Generation Rx here.
Posted by Louisiana Department of Health at 3:10:00 PM No comments:

We can all play a role in preventing suicide

Suicide is generally not on your radar until it affects you personally. Even when a family member or friend is showing warning signs, it can be difficult to talk about. Oftentimes small gestures can make a big difference. 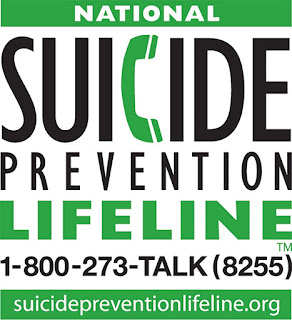 Some warning signs that someone may be having thoughts of suicide include:

If someone you know is struggling, don’t be afraid to reach out to them. Each of us can be the one to help. 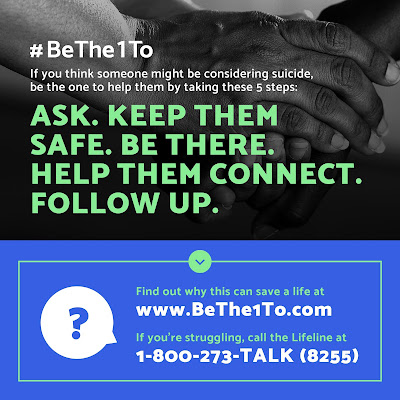 Posted by Louisiana Department of Health at 7:00:00 AM No comments: