(Omar Khalid, senior advisor to Office of Public Health Assistant Secretary Kim Hood, appeared on “Jeopardy!” on March 24, where he finished in second place against Tim McCaigue, an app developer from California, and Ciara Donegan, an undergraduate student from Maryland who won first place.)

I’ve been a “Jeopardy!” viewer for most of my life and have taken the contestant test at least 10 times over the years. Normally, you take the 50-question test, with 10 seconds to type in a response for each question, and never hear back. This time, I found an email in my inbox’s spam folder inviting me to take a follow-up test! I was actually sick with COVID and there were no available slots left, and I was devastated that I may have missed my one shot. Luckily, I got a follow-up email about a month later and scheduled another test. It was identical to the first test, but you take it on Zoom so they can see it’s really you. Again, there was no response on how I did.

About two months later, I got yet another email inviting me to play a mock game of “Jeopardy!” on Zoom. We used clicking pens as buzzers, played a few clues in a game setting against other would-be contestants, and gave a short interview to test out how we would perform on TV. Passing that step put us into a pool of contestants eligible to tape an episode of “Jeopardy!” — but we were told only about a third of those in the pool would get the call to tape an episode. I was quite surprised when I did get a call about a week later inviting me to fly to L.A. to be on the show. 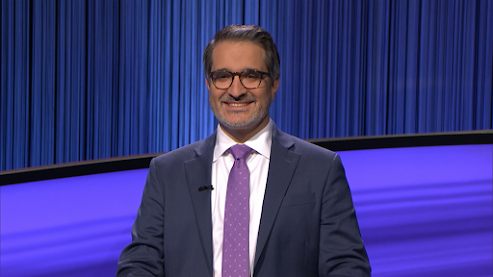 The production itself was extremely professional, and as a public health employee I was pleased to see how incredibly safe they were with COVID-19 precautions. Because my taping was nearly at the height of the Omicron peak, we were required to submit a PCR test before our flight and tested again 12 hours before our taping. The set itself had a COVID safety coordinator and everyone was masked for the entirety of the day. When you see me on TV, those were the only moments I spent without my mask on from 7 a.m. to 7 p.m. There was no studio audience, but the other contestants sat physically distanced in the audience seating and watched each other’s games, as an entire week’s episodes were recorded in one day.

Since longtime host Alex Trebek lost his battle with pancreatic cancer, there has been no permanent host on the show. We found out 74-game champion Ken Jennings would be our host on the day of taping. He was very warm and funny — and a bit taller in person — and I personally would like to see him become the new permanent host.

As for my game, I’ve been getting a lot of kudos for being a car expert since I answered four out of five questions in the “Classic Cars” category (and a $2,000 clue on the Le Mans race), but I definitely feel this is unwarranted. They were just bits of trivia I had stored in my head from 40 years on Earth. There were a number of clues that were quite easy, but I have to say our "Final Jeopardy!" was one of the easiest I’ve seen in a long time. I had little chance to overcome the leader in the game but at least I got to go out on a correct response!

I was also surprised to learn that I did not have any incorrect responses, not an unheard-of feat on the show. It happened most recently a few days before my episode, but it felt good to bat 1.000. Unfortunately, it was not enough to win the day against two very strong opponents, but as the process for even appearing on the show proved, there is definitely an element of luck involved at every step. I have no regrets about how I played and have been supremely overwhelmed at all of the love and support I’ve received in the days since my episode aired.

I recommend the experience to anyone. The Jeopardy! Anytime Test is free to take online at any time. Your results are held for one year, and then you can take it again. Even if you don’t think you’d do great on the show, I encourage you to take it just for fun!

Posted by Louisiana Department of Health at 10:32:00 AM No comments: