In spite of a continued downward trend in adult rates of smoking nationwide, the rate in Louisiana remains relatively high. Experts say this can be attributed to wealthier people kicking the habit while poorer Americans are still lighting up.

Hidden among the steady declines in recent years is the stark reality that cigarettes are becoming a habit of the poor. The national smoking rate has fallen to historic lows, with just 15 percent of adults still smoking. – William Wan, Washington Post

Here in Louisiana, we know the correlation between cigarette use and low socioeconomic areas to be true. According to the 2015 Behavioral Risk Factor Surveillance System (BRFSS)3, 37.9 percent of current Louisiana adult smokers did not complete high school, almost 25 percent have a high school diploma only, and 15.5 percent have at least some college education. 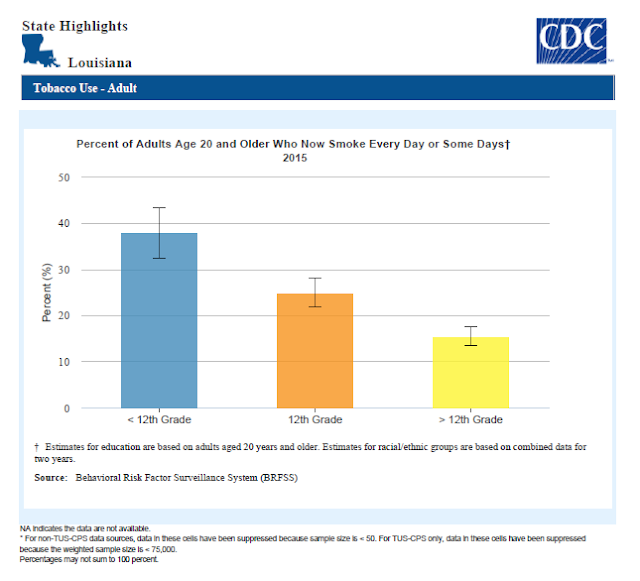 According to County Health Rankings4, published annually by the  Robert Wood Johnson Foundation, many of Louisiana’s most rural parishes reach over the average tobacco use percentage of 21.9 percent with the highest reaching 31 percent in northeast Louisiana.

Why is this happening?

The answer often leans to access. If you think on the most rural areas of our state versus the most populated areas, access to resources is key. Often times there are fewer places to distribute resources related to tobacco-use cessation than in more densely populated areas. According to the Surgeon General’s Report1, cigarette companies are targeting lower socioeconomic (low SES) communities in an effort to retain or increase their customer base in the wake of falling overall prevalence rates. As a result, this leads to a disproportionate representation of tobacco users specifically from these low SES communities.

As shown by the map below, some of the highest rates of tobacco use are found in low SES communities (those that are dark blue, and mainly in the Mississippi delta region). 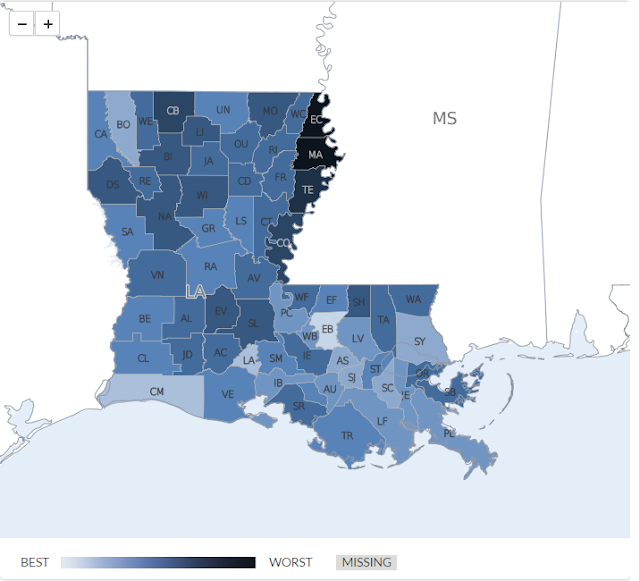 What are we doing about this for Louisiana?

The Louisiana Department of Health administers the Well-Ahead Louisiana initiative.  This initiative is tasked with leading the agency’s efforts to improve health and wellness of our residents. Well-Ahead Louisiana’s WellSpot Designation Program is working across the state to increase the access to healthier options for Louisiana residents. Among these healthy options are resources for providing access to tobacco cessation (quit smoking) services through the Quit With Us LA, tips for how to include tobacco cessation in an employee worksite wellness program and sample tobacco and smoke-free policies for organizations. Each WellSpot designated has a tobacco or smoke-free policy in place for their organization.

Additionally, there are grassroots efforts spanning across the state with the help of partners to directly affect each and every one of the parishes in our state. Over the last three years, there have been more than 2,000 WellSpots designated in our state with at least one WellSpot in every parish. This means there are more than 2,000 WellSpots with tobacco or smoke-free policies in place in addition to having access to cessation resources for the employees, patients and patrons touched by the organizations. To find a WellSpot near you, visit: http://wellaheadla.com/WellSpots/Find-WellSpots.

Also, individuals can utilize any of the resources for their personal use as well as visit the Well-Ahead Community Resource Guide to find tobacco cessation resources by zip code and/or parish. Is there a local resource that you would like for others to know about? Submit a new resource, or email us at wellahead@la.gov. Help us to move your community Well-Ahead!

1. U.S. Department of Health and Human Services. The Health Consequences of Smoking — 50 Years of Progress: A Report of the Surgeon General. 2014. URL: http://www.surgeongeneral.gov/library/reports/50-years-of-progress/full-report.pdf.