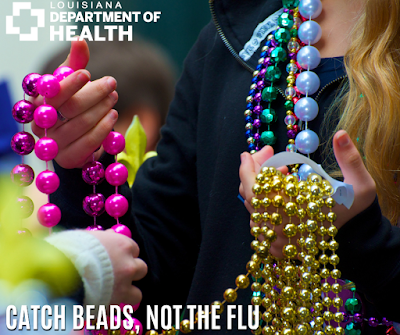 Mardi Gras parades are on a roll — and so is the flu.

Louisiana has seen a spike in flu-like illness in recent weeks as the season reaches its peak, climbing from 4 percent in January to 12.4 percent this month. That’s in comparison to last year’s flu season, which peaked somewhere between 12 percent and 13 percent of all healthcare visits.

Nationwide data shows Louisiana is no different from most states in reporting widespread flu activity. This season is considered by the federal Centers for Disease Control and Prevention to be less severe than recent seasons, though that’s no reason to let down your guard, especially as people gather in large groups for Mardi Gras celebrations.

Best defense? Get a shot

Take action to protect yourself and those around you before celebrating Mardi Gras so that you can catch beads, not the flu. Your best defense is to get a flu shot, which will reduce your chances of getting the flu and spreading it. It’s recommended every year for all people over 6 months of age who do not have a complicating condition, such as a prior allergic reaction to the flu shot. The flu shot is especially recommended for babies and young children, pregnant women, people with chronic health conditions and people 65 years and older.

The flu vaccine isn’t perfect and some people who get their shot may still get the flu, but their symptoms should be milder than if they did not get the flu shot. While you’re at it, talk with your doctor about any other vaccines you may need.

One of the easiest ways to stop the spread of the flu, but the one step that is always is ignored, is to stay home and avoid contact with others if you have even the mildest symptoms. We all know that person who is sniffling, coughing or sounds congested at the meeting or in a nearby workspace. We know they’re sick and we hope we won’t catch their germs.

But what if it’s you with the cough? Will you stay home? The reality is one-quarter of U.S. workers trudge off to the job despite not feeling well. According to Newsweek (which published five reasons why sick people shouldn’t go to work), men are greater offenders than women, with 33 percent of guys going to work while more than 80 percent of women know better and stay home.

Here are some additional tips to prevent spreading the flu:


Learn more about how to fight the flu here.

Don’t ruin your Carnival season by coming down with the flu. Laissez les bon temps rouler!