Protect the skin you're in 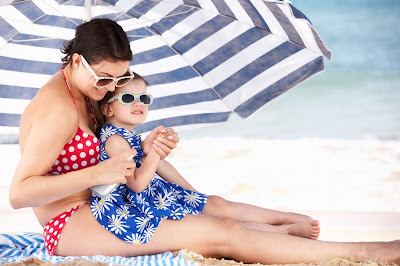 It’s summer in Louisiana and the heat is on.

Did you know daytime weather from June through August averages around 90 degrees Fahrenheit? On top of that, humidity hovers in the 90 percent range most days. Between the heat and the humidity, it’s no surprise that we feel hot and sweaty on a daily basis.

June, July and August are also among the sunniest months Louisiana sees all year, which makes it so important to protect yourself from harmful sun exposure. Skin cancer was the ninth most commonly diagnosed cancer in Louisiana between 2010 and 2014, according to the Louisiana Tumor Registry, which collects information about all cancers diagnosed and/or treated in Louisiana.

Ultraviolet (UV) radiation, which comes from the sun, reaches us whether the weather is sunny, cloudy or hazy. The most hazardous hours for UV exposure in the lower 48 states are from 10 a.m. to 4 p.m. CST.

What is skin cancer?

Cancer is a catch-all term for a disease in which abnormal cells in the body divide uncontrollably and invade other tissues, spreading throughout the body through the blood and lymph systems.

Skin cancer, the fourth most common form of cancer in the U.S., is usually caused by overexposure to UV light. It is commonly classified into three types.


Skin cancer doesn’t discriminate against anybody, but it’s more likely to develop in people with these characteristics, according to the Centers for Disease Control and Prevention (CDC):


If you have any of these characteristics — and even if you have none — it’s vital that you protect yourself when being exposed to the sun. 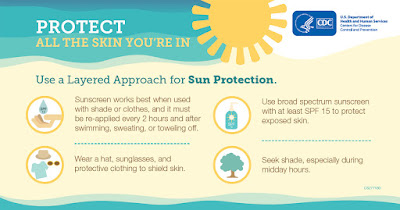 Safety in the sun

The CDC recommends these simple steps to protect yourself from UV radiation:

Sunscreen has been making headlines recently after a pilot study found it takes just one day of sunscreen use for several common ingredients to enter a person’s bloodstream at worrisome levels and for some to continue to build in the blood as daily use continued.

The Center for Drug Evaluation and Research, an arm of the United States Food and Drug Administration (FDA), conducted the study, published in the medical journal JAMA. The study concluded four common sunscreen chemicals — avobenzone, oxybenzone, ecamsule and octocrylene — are among 12 chemicals in need of further research by manufacturers before they can be considered “generally regarded as safe and effective.”

That doesn’t mean you should stop using sunscreen, because we don’t yet know whether these ingredients have any harmful effects after they are absorbed. We do know, though, that overexposure to the sun is harmful, so continue to protect your skin.

If you think indoor tanning is a safe alternative, think again. The CDC says indoor tanning — whether it’s a tanning bed, booth, sunbed or sunlamp — should be avoided. All of these methods expose users to high levels of UV radiation, which may result in skin cancer. Just because it’s from a mechanical source doesn’t make it any safer than the UV radiation you’re exposed to when out in the sun.

The importance of getting screened for cancer cannot be overstated. Through screening, doctors can help find and treat a number of cancers at an early state, before symptoms show up. Cancer that is detected after symptoms appear may have begun to spread and therefore be harder to treat.

Talk to your doctor if you’re concerned about skin cancer — or any other type of cancer, for that matter.

The Louisiana Department of Health’s Taking Aim at Cancer in Louisiana (TACL) initiative launched last year and is working toward improving cancer outcomes in the state. TACL’s goals are increasing access to care, improving the quality of care and reducing the costs of care.

To learn more from the Department of Health about cancer in Louisiana, click here.

So, what’s the bottom line when it comes to sun exposure and tanning, according to the CDC? Every time you tan, you increase your risk of getting skin cancer. Take steps to avoid those harmful UV rays. And remember, skin safety isn’t just for the summer months. Protect the skin you’re in — every day.
Posted by Louisiana Department of Health at 7:00:00 AM