(Note: In 2019, Brent Ambacher shared his recovery story in honor of National Recovery Month, observed every September as a time to increase awareness and understanding of mental and substance use disorders and to celebrate the people who recover. The Department of Health is reprinting his story as the state celebrates Recovery Month 2020. Learn about recovery resources in Louisiana here.)

The last time I had a drink — April 29, 2012 — I didn’t even want one. After about 10 days of AA meetings, I’d heard enough to make me decide I was done, and had given up for good (I thought) about 72 hours earlier. The problem was, after 27 years of consistent and ever-increasing drug and alcohol use, my body wasn’t down with this plan. I was unable to hold down food or water, and had started vomiting blood.

Alcohol is one of the few substances that can actually kill you if you stop abruptly. I sort of knew this. I was fully aware that I was a hopeless alcoholic who hadn’t gone a single day without drinking myself to “sleep” in probably 10 years. But I wasn’t able to connect the dots. I was told I needed to go to the emergency department, but the prospect of waiting for hours in that condition was too horrifying to contemplate. 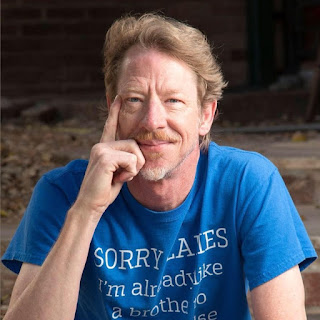 So, instead of my usual vodka intake of more than a liter, I was sitting on my back porch, crying, sweating, shaking uncontrollably and trying to choke down a glass with a mixture of two-thirds beer and one-third honey.

I could not for the life of me understand how this was helpful, but I knew enough to know that I was in serious physical trouble and that a guy with 20 years of sobriety probably knew more than I did about quitting. The drink was his recipe. It took me two hours to get it down, but it worked. How does somebody end up the way I did — 46, jobless, divorced, broke, homeless and staying with my eldest sister?

I was a missionary kid who grew up in Hong Kong and moved back there after college. I’d been a successful photographer, journalist, advertising executive and spin doctor. I’d lived on three continents, married a beautiful, smart and talented English woman, spent nine years in London, moved to New York, traveled the world. I was SOMEBODY. But that was just on the surface.

Inside, I was desperately frightened that one of these days, everyone would figure out that I was a fake, with no talent, and that I didn’t deserve anything I had. I had also been struggling with anxiety and depression for as long as I could remember. Drugs and alcohol were my way of trying to cope with feeling like a failure and prop myself up so I could keep impressing everybody else.

I guess I thought if other people loved me enough, I’d be OK.

I wasn’t. I was a pathetic drunk and I was close to death.

Climbing back from the bottom

That was seven years — and an entire lifetime — ago. I had to start over, from the bottom. I delivered auto parts for a while, and then someone suggested I might look into becoming a Peer Recovery Support Specialist. I’d never heard of one, but I gave it a shot. Besides getting sober, it was the most important thing I’d ever done for myself.

I went to work at a treatment center and spent a little over two years helping people like me. Another person suggested I apply for a job that I never would have dared to try for, but they hired me — as the Statewide Peer for the STR Grant, here at the Louisiana Department of Health’s Office of Behavioral Health. Then they asked me if I wanted to try my hand at facilitating Peer Employment Trainings, so I said yes to that, too. I’ve learned that I don’t often know best what it is that I’m supposed to do next, but saying yes is usually the right idea.

I make about a quarter of what I used to. I don’t jet off for the weekend because I feel like it. But in return, I have so much more than money could buy me. I was able to be present and help nurse my father through the last four years of his decline from Parkinson’s and dementia, and I was at his bed when he died. I have a job where I’m allowed to be useful, and where the pain of my past can light a pathway forward for people who are looking for a way out of substance use and mental health challenges.

And, for the last 2,600-and-something days, I haven’t needed a drink or a drug to be OK with myself. It sure seems like a good trade to me.

Posted by Louisiana Department of Health at 9:00:00 AM