Louisiana in November 2019 gained the unfortunate distinction of joining the states that have recorded deaths tied to vaping devices and the lung injuries they cause.

There have been questions about the safety of vaping since the devices, including e-cigarettes, were introduced to the U.S. in 2006. Conventional wisdom among the industry and those who use vaping products is that vaping is a safer alternative to smoking because vaping products do not contain the dangerous, harmful tar found in cigarettes. However, the Louisiana Department of Health and the Centers for Disease Control and Prevention (CDC) believe that vaping is not safe.

The absence of tar in vaping products does not make vaping safe. Again, vaping is not safe, and Louisiana’s two deaths and more than 30 people severely sickened by vaping products serve to highlight that fact.

While we do not yet have long-term studies to understand how vaping devices affect long-term health, the vaping injuries we are seeing are very serious. Nationwide, 95% of those patients with lung injury, also known as EVALI, were hospitalized.

Vaping-related lung injuries are having an impact on families in the state. That’s why the Department of Health is recommending people stop using all vaping products — especially those being sold on the street or that have had substances added after their manufacture. The CDC has found what it’s calling a “chemical of concern” that may be the source of the deaths and injuries: Vitamin E acetate. It’s often used as a thickening agent in vaping devices that deliver THC, the active ingredient in marijuana. The chemical is also found in some nicotine products. 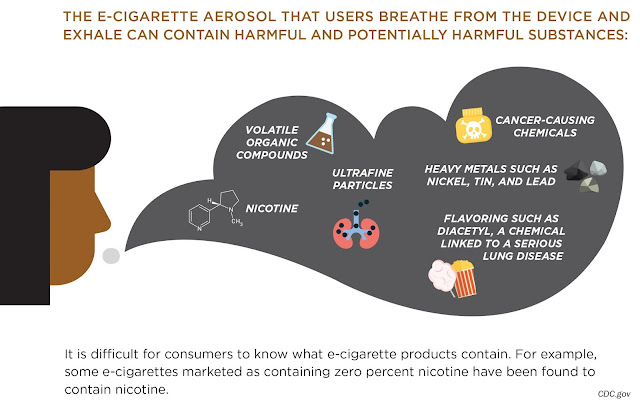 People who continue to vape should seek medical attention if they experience symptoms of EVALI, including cough, shortness of breath, chest pain, nausea, vomiting, diarrhea, fatigue, fever and weight loss.

The Department of Health is asking healthcare providers to ask their patients who have used vaping devices within the past 90 days if they’ve had any of those symptoms. Providers who suspect their patients may have lung injury should report those cases to the Department.

One of our major concerns about the rise in vaping use is its popularity among young people.

Between 2011 and 2013, the CDC reported the use of vaping devices doubled among people ages 18 to 24 nationwide. In Louisiana, vaping among middle and high school students doubled since 2017 and tripled since 2015. 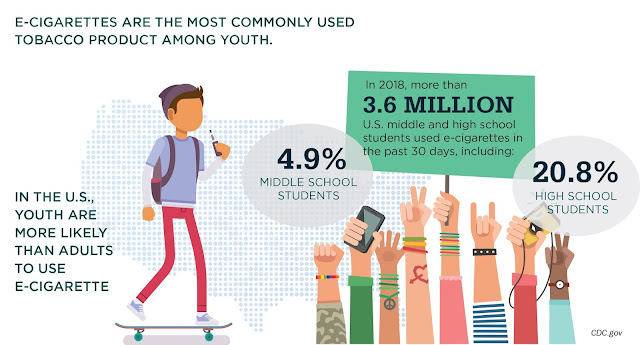 The presence of nicotine may make vaping devices appear attractive as a less-harmful replacement to smoking, but the safety concerns around vaping should emphasize the importance of quitting nicotine use altogether. Smoking cessation aids are widely available to help users quit smoking and vaping, with nicotine patches, gum and lozenges all available over the counter.  Inhalers and nasal spray are also available with a doctor’s prescription.